Ducks and Canucks having trouble making the money work

Rick Dhaliwal: Have been hearing that the Vancouver Canucks and Anaheim Ducks are still talking about forward Jake Virtanen. Ducks Danton Heinen has come up in talks.

“Well it’s been kind of something that has been talked about all week is Jake Virtanen and the Anaheim Ducks. They’ve been dance partners with each other, trying to see if something can fit, and Vancouver twitter did it’s thing today blowing it into a one-for-one deal with Danton Heinen. Right now as it stands at 8:50 PM Eastern Time on Saturday night, I think it’s more not likely than likely that this happens.

Quite simply it’s the salary. This is actual cash and not cap hit and the numbers just have to match. The Ducks and Canucks have been trying to work to see what else they could do in this deal to make it work so they could complete it. But as it stands on Saturday night it’s not sounding optimistic. Although they have tried before, all week, and they may try again.” 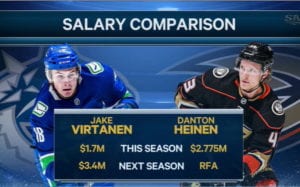 Teams still fighting to move the draft back

Sportsnet: Teams are still hoping to have the 2021 NHL draft that is scheduled for July 23rd and 24th pushed back according to Chris Johnston.

“Well the conversations are continuing Ron, and Elliotte mentioned this last week on Headlines, that the NHL and NHLPA would have a number of issues that have to be worked out if they were to move the draft from July to a later date. So the preference maybe is to just keep it there, but I can tell you that teams involved are not going to back down easily on this issue.

There is certainly a strong thought among NHL teams that they need more time to see the players, to evaluate them before that draft. And so it’s difficult to pin right now where this goes because there’s a lot of complicated factors. I think everyone involved recognizes, but at the same time, the teams really don’t want to see this happen in July as scheduled.

So this is one where our antennas are up Ron because certainly there’s a lot to sort out and it’s not an easy answer.”

It could be a busy trade deadline day. Will Ristolainen look to test the open market?…

Rutherford touching on some Vancouver Canucks rumors. Rangers are interested in…