NHL Rumors: When The Toronto Maple Leafs Could Make Move

Elliotte Friedman during intermission on Wednesday, when asked to put together a timeline about when the Toronto Maple Leafs might be thinking to make a trade given that player(s) may need to quarantine.

“First of all, I not exactly lacking an opinion on this, or a position in the sense that we have to work trade deadline, so I hope that some people leave things until the last possible moment.

But the one thing I was doing was looking at Toronto’s schedule and thinking, ‘okay, are they looking at it like, is there an opportune time when our schedule where we could bring somebody in if we wanted to.’

I think there is a spot. If you take a look at them next week. They go through a spot where they have five games in 14 days and I do wonder if Toronto is going to look at this and say, ‘if there is a point that it makes sense for us,’ there’s a lot of parts to this, have to have a partner, have to have cap space, all of that, but I do look at their schedule and say, ‘I wonder if the Maple Leafs are going to target that because they know it’s part of their time between now and April 12th where they’ve got an opening.’ 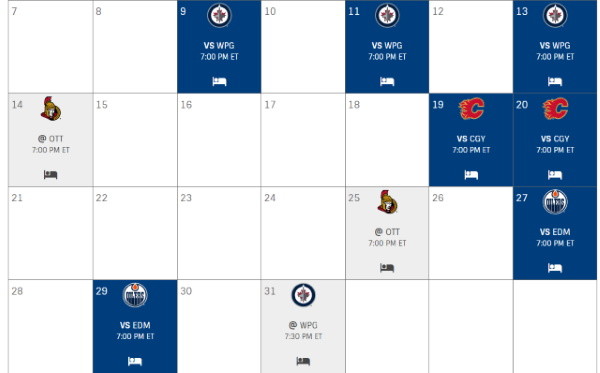 Jeff Marek jumps in by saying, “So the 11th could be a date you would target on this then Elliotte?” Friedman responds:

“I know this isn’t radio, but please try not to radio me.

“I’m just saying, I look at that point in their schedule. The way they think as an organization. I can see them saying that might be an optimal time.”

Marek asks Friedman what position they might be after.

“I still think top-six forward if they can do it.”

Kraken GM on their head coach search. Getzlaf will evaluate his future this offseason.…

Rumor roundup from around the league involving the Bruins, Jets, Maple Leafs,…