NHL Trade: Canadiens Trade Max Domi And A Pick To The Blue Jackets For Josh Anderson

The Montreal Canadiens have traded forward Max Domi and a 2020 third round pick to the Columbus Blue Jackets for Josh Anderson.

The 25-year old Domi was drafted 12th overall in the first round of the 2013 draft by the Phoenix Coyotes. He is an RFA.

The 26-year old Anderson was drafted 95th overall in the fourth round of the 2012 draft by the Columbus Blue Jackets. He is an RFA.

Jeff Svoboda: Blue Jackets GM Jarmo Kekalainen: “Strengthening our center ice position has been a priority for our club and we are extremely excited to add a player of Max Domi’s talent and character to the Columbus Blue Jackets.”

Thoughts from the media

Renaud Lavoie: “Lots of teams were calling on Josh Anderson in the last few days and weeks. Probably one of the most popular player on the market for many reasons. Great trade by Marc Bergevin and I’m sure some teams are not happy right now that he’s not available anymore.”

Thomas Drance: “Interesting swap of former London Knights teammates, and it makes a lot of sense for all involved. Anderson is a better fit for how Montreal plays under Claude Julien than Domi was, Domi brings some offensive dynamism otherwise lacking among Columbus’ forward ranks.”

Jason Paul: Josh Anderson had 4 empty-net goals (when he scored 27). You know why? because he was on the ice for crucial defensive minutes – to hold leads late in the game. (something were bad at) Plays PK. Plays big. The depth chart looks much more organized now.”

I don’t think the difference in quality between Domi and Anderson is all too significant, though I do find it odd that Montreal had throw in a 3rd.

Though, to be fair, if Anderson really was MTL’s guy, they had the surplus draft capital to afford to shed a pick pic.twitter.com/uu0LZXH2Mz

Josh Anderson is a solid second-line winger who’s coming off of a season where he had awful on-ice shooting luck. Strong offensive playdriver and not bad defensively. Nice PK numbers. #GoHabsGo pic.twitter.com/Weurh2pcQU 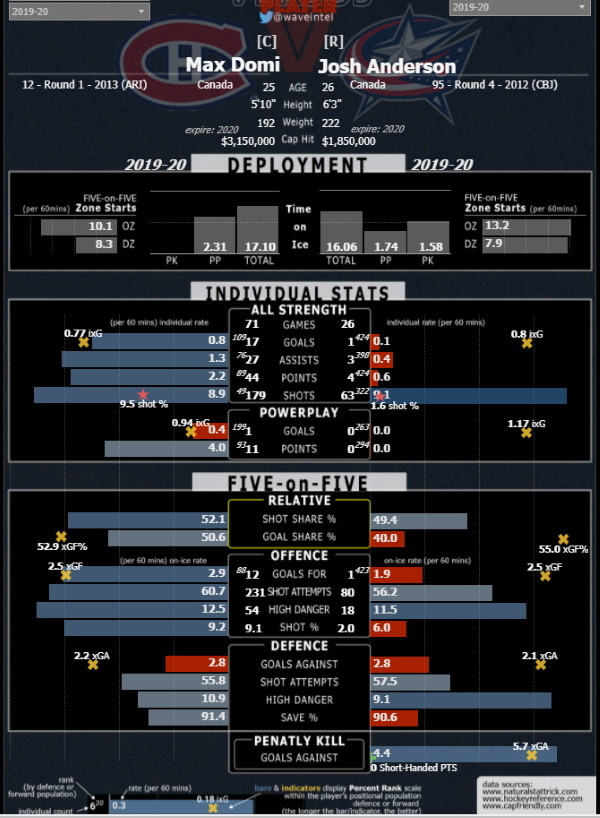 Down to five players on the NHL's COVID list. Ullmark out at least a month. Makar out.…

A look at five single games records that will likely never be broken, starting off with…

After adding Taylor Hall this offseason, the Buffalo Sabres were hoping for better…