Pucks In Depth: Surging Pens, Hampus for Sweden and an Even Trade

Total
0
Shares
Share 0
Tweet 0
Pin it 0
Pucks In Depth: Surging Pens, Hampus for Sweden and an Even Trade

Written by Todd Cordell, who can be found on twitter @ToddCordell.

Many are down on the Pittsburgh Penguins this season due to their uninspiring start to the season under Mike Johnston.

While they admittedly weren’t very good under Johnston, they’ve been excellent since the coaching change and have done more than enough for me to once again label them as legitimate contenders in the Eastern Conference.

Over the last few months they’ve been steamrolling teams at full-strength and have posted better underlying numbers than the four best teams in the East (by record). 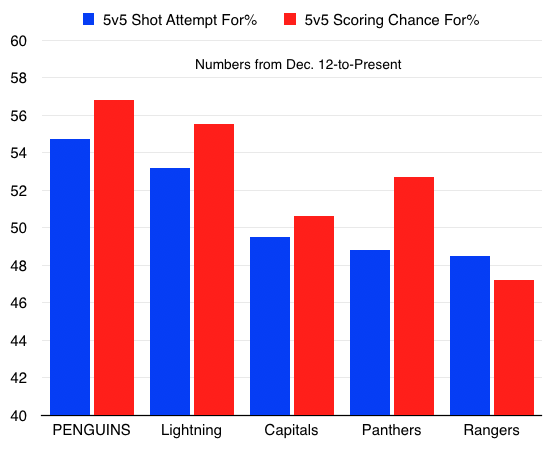 Factor in Sidney Crosby’s resurgence (44 points in 33 games), and all the firepower they have, on top of the outstanding 5 v 5 hockey they’ve been playing and they’re certainly not a team I’d want to face early on in the playoffs.

They may not beat the Caps, for example, but I think they’d give them a lot more trouble than most of the other teams in a poor conference.

Team Sweden announced the first 16 members of their World Cup team last week and Hampus Lindholm was a stunning omission.

While the Swedes are known for their star blue liners – and there is certainly no shortage of them – Lindholm is truly among the NHL’s elite and is deserving of a spot.

On Sweden’s initial 16-man roster they have six defenseman, which means there’s only one spot open for the likes of Lindholm, John Klingberg and Adam Larsson, among others.

There’s still a chance Lindholm can make the team, obviously, but I think he’s better than a few of the guys that were given the early nod and the numbers back me up. 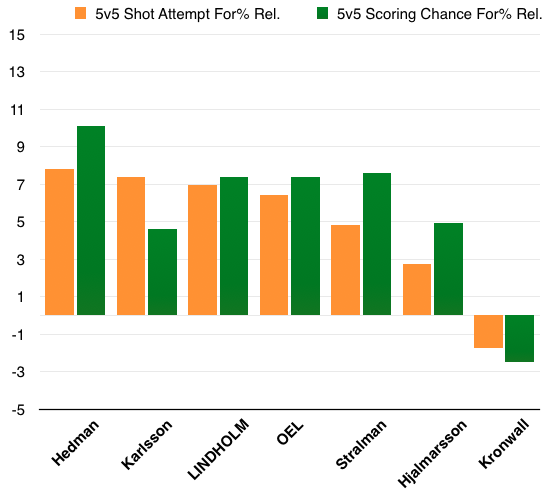 As you can see Lindholm’s 2015-16 numbers, relative to his teammates when he’s not on the ice, are comparable to those of Victor Hedman, Erik Karlsson and Oliver-Ekman Larsson while they’re better than the likes of Anton Stralman, Niklas Hjalmarsson and Niklas Kronwall.

I think Stralman should definitely be on Team Sweden’s roster but I think Lindholm is a more useful player than Hjalmarsson and, at this point in his career, is a country mile ahead of Kronwall.

I believe Lindholm’s presence would make Sweden a much better team and think he’s done enough to earn a spot.

There aren’t many win-wins when it comes to trades in the NHL, but early returns suggest the David Perron-for-Carl Hagelin swap should be considered as such.

It’s been just two months since the trade but both players have flourished on their new teams and have posted remarkably similar numbers.

Perron has 18 points in 21 games while Hagelin has 13 in 21 games, but both players have contributed 11 points at even-strength.

Their underlying numbers have been quite similar, too. With Perron on the ice at 5 v 5 the Ducks have generated a 57% share of the shot attempts and a 59.1% share of the scoring chances while Hagelin comes in at 56% and 59.7% respectively.

Perron’s in-your-face style seems to be a better fit for the Ducks, while Hagelin’s speed gives the Penguins another weapon at even-strength and on the penalty kill.

It’s still early, obviously, but both players have made positive impacts on playoff teams and have proven to be worthwhile additions.

Rask hopes to return in January. Byram could play tonight. Rust being evaluated.…