With true hockey deals so hard to make in today’s NHL, the trade deadline mostly consists of teams selling off rentals to contenders looking for an extra piece or two to help them make a serious run at the Stanley Cup.

With that in mind, here is a look at the top-10 (plus one extra) rental players who could, and probably will, be traded at this year’s deadline.

Due to the Devils’ surprisingly successful season to date, Stempniak will probably stay put, but if he’s made available he’ll surely garner plenty of interest.

He has more points than the likes of Max Pacioretty, Sean Monahan, Brandon Saad, Filip Forsberg, James Neal and Phil Kessel, among many others, and carries a very team-friendly cap hit of $850,000.

Factor in that he has playoff experience and is capable of playing in all situations and that makes him a very attractive piece should the Devils part ways with him.

The Flames would like to re-sign Russell and he’d like to stay put, but the two sides probably won’t be able to reach an agreement to due financial implications.

As such it seems likely that Russell is moved before the deadline and if he is there will be no shortage of suitors.

I think the Flames would be smart to trade Russell as his perceived value is significantly higher than his actual value, but when all is said and done he’ll probably fetch a decent return, which is why he’s on this list.

Relative to his team he is not good at suppressing shots, scoring chances or goals, and has played way over his head in Calgary. If given sheltered minutes like he was when he broke into the league with Columbus, he could be a nice depth addition.

The Maple Leafs have done a nice job rebuilding the stock of Parenteau following a tough year in Montreal where, for whatever reason, he was regularly benched by head coach Michel Terrien.

Parenteau carries a very friendly cap hit of $1.5 million and he’s on pace for 20 goals and 40 points. That should make him an attractive option for teams that don’t want to mortgage their future to upgrade offensively.

Hamhuis has never been a big threat offensively – his career high in points is 38 – and that holds even more true at this point in his career.

In saying that, he is still an effective player and is a perfect example of a modern day defensive defenseman.

He is pretty good with the puck, can get around the ice fairly well and is legitimately good in terms of suppressing shots, scoring chances and goals.

Again, he won’t ‘wow’ anyone with gaudy offensive totals, but he can still handle himself while logging a good chunk of minutes.

I think he’d be best suited on the second pairing in a defensive role.

Vrbata is having a bit of a down year on a bad Vancouver Canucks team, but he is a capable goal scorer and would be a big help offensively to any contending team looking for some more pop in their lineup

Since the beginning of 2014-15 Vrbata has 42 goals and 86 points in 133 regular season games. In that span he has scored more 5 v 5 goals than James van Riemsdyk, Ryan Johansen, Jeff Carter, Logan Couture, Gabriel Landeskog and Claude Giroux, among others.

Boedker has emerged as one of the biggest names on the trade market due to contract demands that the Arizona Coyotes probably aren’t prepared to meet.

Boedker’s perceived value seems to out weigh his actual value as his underlying numbers – in terms of possession and scoring rates – leave a lot to be desired, but he is a very speedy winger with a good shot and a history of putting up respectable point totals on bad Coyotes’ teams.

He probably won’t be worth what a team will have to trade to get him, but I think he could be a nice addition on a team like, say, Chicago riding shotgun alongside Jonathan Toews and Marian Hossa.

Hudler’s production has expectedly dipped following a career year last season but he’s still producing at a very respectably 54-point pace on a per 82 game basis.

He had a rough start to the season but has picked it up over the last couple weeks, producing at ~1 point per game clip in that span.

He can score goals, put up points and is generally good at suppressing shots relative to his team when he’s not on the ice.

Staal’s production is far from what it used to be – he’s on pace for about 15 goals and 45 points – but he’s still a pretty good player and would be a nice guy to plug in at the 2-hole on a contending team.

Again, he’s not a huge point producer at this point in his career, but he can chip in offensively while still providing above average defensive play and driving possession.

Ladd’s 5 v 5 production has declined in recent years but he is still a capable two-way winger who would be a nice addition to any team looking for help on the left side (hello, Chicago). 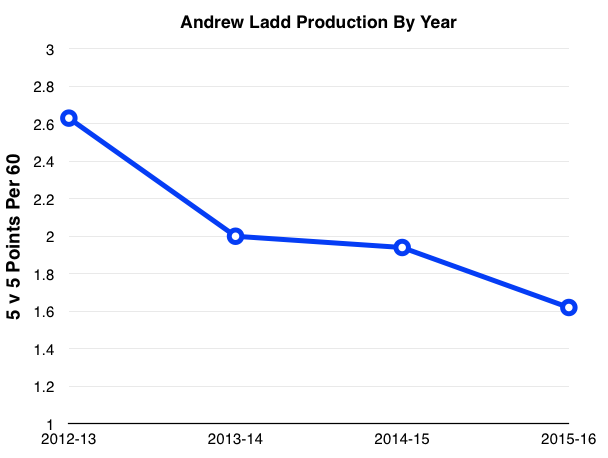 He’s generally good for 20+ goals and 50+ points per year and he is a guy who can play in all situations of the game.

He also has a couple Stanley Cup rings to his name and experience being a captain which should make him even more attractive to interested parties.

It sounds like the Boston Bruins are not keen on signing Loui Eriksson to a big money, long-term contract extension.

As such, it seems likely that Eriksson will be moved before the February 29th trade deadline.

There should be no shortage of suitors given his production as he’s on pace for more than 25 goals and ~65 points.

What’s nice about Eriksson is that he isn’t just milking points on the man advantage to make his numbers look more impressive. He’s been legitimately good at producing during full-strength play.

His 5 v 5 points per 60 is higher than that of Henrik Sedin, Corey Perry, Ryan Getzlaf, Evgeni Malkin, Ryan Johansen and Patrice Bergeron to name but a few.

Eriksson is also good in terms of possession – Boston gets ~6% more of the shot attempts with him on the ice at 5 v 5 – and is a capable penalty killer.

There is no guarantee the New York Rangers trade Yandle, but should they decide to part ways with him – rather than possibly losing him for nothing in the summer – they won’t have any problem fetching a good return.

Some dislike Yandle because he makes a head scratching turnover on occasion, but the good significantly outweighs the bad when it comes to his play.

He’s a smooth skating defenseman that can log big minutes, drive possession and put up points in bunches. Those guys don’t grow on trees.

Written by Todd Cordell, who can be found on twitter @ToddCordell.

What does Bryan Rust's extension mean for some other Penguins? David Pastrnak is…

Kadri getting threats. Binnington done for the series. No discipline for either. Maple…

Stars could be eyeing Tocchet and Savard. Oettinger needs a new deal. Hintz may get an…

The Flyers will talk with Barry Trotz this week. The Jets are also interested in Trotz…